I never thought I’d put those words in any blog post but there they are.

According to researcher extraordinaire Trevor Loudon of New Zeal, the Communist Party USA (CPUSA) is experiencing a resurgence. Read his article here. 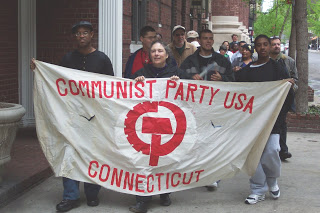 It’s scary stuff. There aren’t that many actual CPUSA members out there, but they tend to be very active in the labor movement, the Democratic Party, and in groups like ACORN which allows them to leverage their influence. Moreover, a large percentage of Democratic members of the House of Representatives (about 70 members in all) are virtually small-c communists. Look them up at the website of their deceptively named group, the Congressional Progressive Caucus.

Like ACORN, CPUSA members are committed to using violence to bring about a radical transformation of America.

Read more about ACORN’s commitment to revolutionary violence and all-around thuggery in my upcoming book Subversion Inc.: How Obama’s ACORN Red Shirts Are Still Terrorizing and Ripping Off American Taxpayers, which comes out soon. Pre-order it now!