My article from the July 24, 2013 issue of FrontPage Magazine: 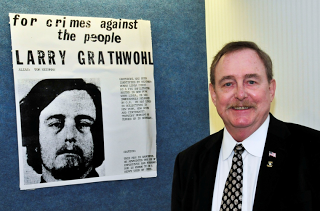 Larry Grathwohl: Requiem for an American Hero
By Matthew Vadum
A great patriot who suffered and risked everything he had to defend the United States of America by infiltrating the Weather Underground terrorist group in the late 1960s, died suddenly last week.
Larry Grathwohl passed away at the age of 65 in his Cincinnati apartment on July 18, apparently of natural causes. Although no cause of death has been made public, he had been in poor health for some time.
Born in Cincinnati on Oct. 13, 1947, Larry David Grathwohl was a highly decorated Vietnam War veteran.
After fighting Communists abroad, he decided to fight them at home. He returned to America after serving in the U.S. Army’s 101st Airborne Division and took it upon himself to infiltrate the group, joining the Weatherman collective in Cincinnati. In his clandestine enterprise he rose quickly, aided by his perceived authenticity as a working class Vietnam vet, unlike the spoiled rich-kid draft resisters who ran the organization.
The story of Grathwohl is very much also the story of Bill Ayers.
For reasons that historians will argue about for decades to come, the revelation that socialist Barack Hussein Obama was close personal friends with unrepentant Weather Underground bombers Bill Ayers and Bernardine Dohrn failed to torpedo Obama’s presidential bid. In fact, it caused little more than a ripple at the time in the mainstream media and only came up when alleged journalist George Stephanopoulos, a longtime Bill and Hillary Clinton loyalist, raised the disturbing connection during a primary-season presidential debate to hurt Obama’s campaign.
Grathwohl’s daring venture into the bowels of the anti-American Left showed that the subversives of the Weather Underground Organization (WUO), which grew out of the Students for a Democratic Society (SDS) splinter group Weatherman, worked with Cuba and the governments of other hostile foreign nations.
WUO bombed the Pentagon, the U.S. Capitol, and various other sites of national importance throughout the 1970s. One of its key leaders, trust fund baby Ayers, now portrayed by the media as an innocuous school reformer, famously said he didn’t regret what he did and he’d do it again.
Ayers claims the WUO never killed anyone. If that’s true, it wasn’t for lack of trying. Sometimes bombs failed to detonate. In a Greenwich Village townhouse, one bomb that was supposed to be planted at a well-attended dance exploded prematurely, killing several terrorists including Ayers’s girlfriend at the time.
Ayers was obsessed with violence, Grathwohl explained. Ayers spearheaded the group’s effort “to make plans to select and destroy targets that were symbols of authority. If necessary, we would kidnap government officials for ransom and assassinate others when it was politically expedient,” according to Grathwohl.
In his recently reissued work, Bringing Down America, a fascinating 1976 book he co-wrote with the late Frank Reagan, Grathwohl summed up why he took the unusual step of joining the Weather Underground in order to undermine it. He feared these New Left revolutionary communists might actually make headway with their totalitarian program.
“The Weathermen’s government will be one of total control over each individual in the society,” he wrote. “In Weathermen terminology, this new society will be ‘one people working in total unity.’”
“This means an elimination of all the individual freedoms we are accustomed to having; it was my absolute belief in the freedoms offered by our form of government that drove me to fight the Weathermen in the first place. Even though I am no longer in the underground movement where I could help prevent violence before it happened, as in Dayton, Detroit, Madison, and Buffalo, while creating as much disunity as possible, I am still working against Weathermen and other radical conspiracies. Their way of life is not mine.”
Although plenty of largely sympathetic drivel has been written about the Weather Underground, very little scholarship has focused on the truly diabolical plans the group hoped to execute had it succeeded in its stated goal of overthrowing the elected government of the United States. Time magazine once boosted Grathwohl as the only successful infiltrator of the Weather Underground, but the media could only yawn when he resurfaced on a few television shows during our terrorist-friendly president’s first drive for election. It was media malpractice at its worst.
By contrast, media outlets are enthralled by Ayers. Few treat him as a villain. Newspaper articles typically treat him as a well-intentioned community organizer or at worst as a misguided eccentric. The headline of a particularly infamous New York Times softball of a profile published on Sept. 11, 2001, labeled Ayers a mere “War Protester.” This would be akin to describing racial arsonist Al Sharpton as a social worker or a motivational speaker.
But Grathwohl’s secret project, which put his life at risk, showed Americans that the WUO aspired to liquidate those people who stubbornly clung to the American ideals that took a daily pounding throughout the national suicide attempt known as the 1960s.
Grathwohl attended a kind of Wannsee Conference at which WUO members plotted the murder of 25 million Americans. At the Wannsee meeting in 1942, Hitler’s cabinet members and senior bureaucrats set in motion the “Final solution to the Jewish question,” that led to the systematic murder of six million Jews.
At the meeting Grathwohl attended he said the Weather Underground planned to exterminate those who resisted the communist revolution. In a discussion about internal debates within the group, he told an interviewer:

I brought up the subject of what’s going to happen after we take over the government: we become responsible then for administrating 250 million people. And there was no answers. No one had given any thought to economics, how you’re going to clothe and feed these people.
The only thing that I could get was that they expected that the Cubans and the North Vietnamese and the Chinese and the Russians would all want to occupy different portions of the United States.
They also believed that their immediate responsibility would be to protect against what they called the counter revolution and they felt that this counter revolution could best be guarded against by creating and establishing reeducation centers in the Southwest where would take all the people who needed to be reeducated into the new way of thinking and teach them how things were going to be.
I asked, well, what is going to happen to those people that we can’t reeducate that are diehard capitalists and the reply was that they’d have to be eliminated. And when I pursued this further they estimated that they would have to eliminate 25 million people in these reeducation centers. And when I say eliminate I mean kill – 25 million people.
I want you to imagine sitting in a room with 25 people most of which have graduate degrees from Columbia and other well known educational centers and hear them figuring out the logistics for the elimination of 25 million people and they were dead serious.”

One chilling idea WUO leaders entertained was working enemies of the revolution to death in labor camps, something many so-called progressives today would no doubt favor doing to Tea Party supporters.
Nearly a half century after the fact, Ayers denies Grathwohl’s allegations. Of course, Ayers is a notorious prevaricator and he’s admitted his memory is awful. As Ayers wrote in Fugitive Days, which one reviewer called his “self-indulgent and morally clueless” 2001 memoir:
“Memory is a motherf—er. I myself remember almost nothing. I don’t remember the places I’ve been in the last year, where I’ve stayed, or the people I’ve met. It’s all a blur, really, all that traveling, all that work, for what?”
Grathwohl also helped law enforcement officials in their efforts to deal with other Weathermen.
He was involved in the case of Sgt. Brian V. McDonnell, who was killed in the Feb. 16, 1970 bombing of the Park Police Station in San Francisco. (Another police officer was injured.) McDonnell lingered a while. After suffering major injuries to his neck, McDonnell succumbed two days later. The murderers have never been brought to justice.
Grathwohl testified under oath that Ayers informed him that Dohrn planted the shrapnel-laden explosive device. The bomb contained nails and heavy construction staples, which Grathwohl said Ayers favored as a way of maximizing deaths and injuries. A federal grand jury investigated the couple in 2003 and in 2009 the San Francisco Police Officers union formally accused them of participating in the attack. The case is still open.
On Oct. 18, 1974 Grathwohl testified behind closed doors before the Internal Security Subcommittee of the Senate Judiciary Committee about his experiences. (Months later the subcommittee made the transcript from his testimony public.) His testimony showed that his involvement with Weatherman and the aftermath ate up years of his life.
The U.S. government did recognize Grathwohl’s contributions in one way. At the time he agreed to penetrate the Weather Underground, Grathwohl was using the GI bill to attend college. The time limit ran out while he was still assisting the FBI. Congress approved a special law to restore his lapsed GI educational benefits.
Sen. Samuel Hayakawa (R-Calif.) introduced a private bill “for the relief of Larry Grathwohl,” on March 7, 1979. After Congress approved the bill, President Carter signed it into law on Dec. 16, 1980.
Grathwohl paid a high personal price for his service to his country, as he explained in congressional testimony and in Bringing Down America.
When New York City police inadvertently “made” Grathwohl in front of other Weathermen, he had to be indicted in order to preserve his cover. After the prosecution fizzled, he still had to deal with the consequences of being named in a high-profile criminal case. His name made headlines in his hometown, not as a hero, but as a dangerous fugitive waging war against his own country as a member of a high-profile terrorist group. Even his own mother didn’t believe him at first when he explained he was working undercover.
Grathwohl did more undercover work for the FBI for a while, but he had to be careful because Ayers and his coterie of revolutionaries had put out a “wanted” poster after sentencing him to death for crimes against the people. The FBI helped him get work but on the books he remained a fugitive. He spent years in limbo waiting around to testify at trials as other Weathermen were apprehended.
Grathwohl’s testimony before a grand jury in Detroit was central in the case against Ayers and led to his indictment. Ayers eventually got away scot-free and set about poisoning the minds of the young, a task at which he has been enormously successful as an education theorist.
After leaving the service of the FBI, Grathwohl worked as a private investigator and operations manager for various corporations. In recent years he worked for Cliff Kincaid at America’s Survival.
Twice divorced, Grathwohl leaves behind his best friend and ex-wife Sandi to whom he remained very close, along with three children, three grandchildren, his mother, and five siblings.
Disillusioned former leftist academic Tina Trent, one of Grathwohl’s many mourning friends in the conservative movement, wrote the introduction to the recent version of Bringing Down America.
“Larry died before achieving his goal of seeing Bill Ayers, Bernardine Dohrn, Jeff Jones and other Weathermen convicted for their reign of terror against innocent police and soldiers,” Trent said.
“Larry was a sweet and decent and very wise man,” she said. “He risked his life to protect us from murderous adolescent Marxists like Bill Ayers and Bernardine Dohrn.”
There would be family members of police and soldiers who would be without their loved ones today had Larry “not infiltrated the Weather Underground and exposed their crimes,” Trent said.