The Democratic Party is officially encouraging supporters to go to Speaker John Boehner’s house and dump garbage on his lawn in order to intimidate him into rubber-stamping President Obama’s destructive spending spree. Such protests can easily turn violent, especially with the tense, hyper-partisan atmosphere on Capitol Hill right now. 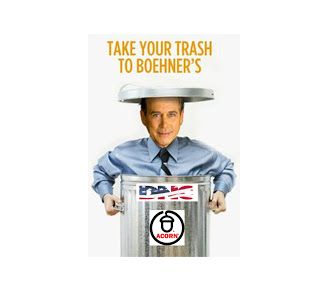 Is it a coincidence that not long after longtime ACORN operative Patrick Gaspard took over as executive director of the Democratic National Committee the DNC is planning destructive ACORN-like protests?  Not bloody likely. As chief of the DNC’s day-to-day operations, Gaspard runs Organizing for America, the Saul Alinsky-inspired organization created to wage war on American democracy. Gaspard’s fingerprints are all over this. It’s what the former Obama White House political director does for a living.

But how do we actually know this is a DNC-approved event? Because the event advertised on Facebook is organized by longtime DNC employee Jonah Goodman.

Goodman is listed as a member of the DNC network on his Facebook page. According to Facebook rules (under the heading “How do I join a supported Facebook network?”) this means he is an employee of the DNC. Facebook instructs users as follows: “To join a work network, you need to have a work email address from a supported company. This will put you on a network with your coworkers.” If Goodman ceased to be an employee he was required to leave the Facebook network. The other organizer of the event is Nolan Treadway who is the political and logistics director for the leftist organization Nutroots Netroots Nation. (His Facebook profile is here.)

There is no limit to what these despicable Alinskyites will do. They don’t care how many people get hurt in the process of radically transforming America.


Follow me on Twitter and please buy my upcoming book Subversion Inc.: How Obama’s ACORN Red Shirts are Still Terrorizing and Ripping Off American Taxpayers.