ACORN’s terminal national chief organizer, the pathological liar Bertha Lewis, thinks people are stupid and can be fooled easily. This is the charming lady who referred to the Tea Party as a “bowel movement.” 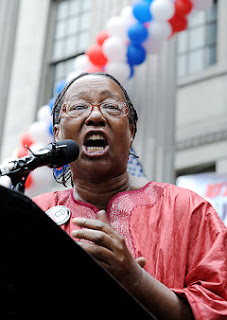 Give it up, Bertha.

* * * * *
America needs to know that ACORN is restructuring in time to help re-elect President Obama in 2012. Obama used to work for ACORN and represented the group in court as its lawyer. These radical leftists who use the brutal, in-your-face, Machiavellian pressure tactics of Saul Alinsky want to destroy America as we know it and will use any means to do it.
Buy the book at Amazon. Visit the Subversion Inc. Facebook page. Follow me on Twitter.