Left-wing pseudojournalist Brad Friedman thinks everything reported about ACORN is overblown. It’s all a scheme concocted by a vast right-wing conspiracy. Clearly he hasn’t read my book, Subversion Inc.: How Obama’s ACORN Red Shirts are Still Terrorizing and Ripping Off American Taxpayers. 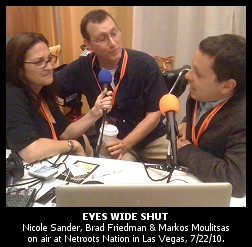 Friedman, who routinely chokes on his own robust self-esteem, is often a substitute host on the “Mike Malloy Show.” Malloy has serious, shall we say, psychiatric issues. He has called for the murder of former President George W. Bush, described Fox News as a “terrorist organization” that “wants to burn the country down,” and characterized Congresswoman Michele Bachmann (R-Minnesota) as a “whore,” “streetwalker,” and a “crazy bitch.”

Filling in for his straitjacket-worthy buddy Malloy a few days ago, Friedman, who is also a business partner of convicted “Speedway Bomber” Brett Kimberlin (see mugshot below), unloaded everything that has been bugging him about the alleged persecution of the ACORN crime syndicate. (The audio clip is available at Friedman’s blog. Click on “HOUR 1.”)

Friedman thinks the undercover “pimp and prostitute” videos are a hoax and that Andrew Breitbart should be in jail. He wants the videographers, James O’Keefe III and Hannah Giles, to “pay” for whatever it is they supposedly did to poor little ACORN. He accuses anyone who thinks voters should have to present ID in order to vote as engaging in “voter suppression.”

Friedman also doesn’t seem to understand the term voter fraud, making a fool of himself on Fox News with John Fund in 2008. The obnoxious Friedman jumps all over Fund, insisting that voter fraud and the voter registration fraud that Fund is apparently referencing are entirely separate things. “There’s a big difference” between the two, Friedman says.

This is Friedman’s shtick. He uses it routinely to downplay the exhaustively documented crimes of ACORN against the integrity of America’s electoral system.
Said Friedman on the Malloy show:

Where is the ACORN voter fraud? It doesn’t exist! It never existed! There is not one single vote, no evidence – no evidence of any single vote ever having been cast following an improper ACORN registration. Not one fraudulent vote! For all that you’ve heard and how they’re stealing elections for Democrats…never happened, not once! It’s completely phony, it’s completely made up, and it’s made up for one reason – so that the same Republicans who are lying about it can turn around, pass bills that keep you from being able to cast your legal vote because they can’t win elections if everybody gets to vote. They’ve got to game the system! And that’s what they do, that’s what they did! Democrats and Obama should be ashamed of themselves to have signed on for defunding ACORN, but they did it.

For a refutation of Friedman’s nonsense, read Subversion Inc.: How Obama’s ACORN Red Shirts are Still Terrorizing and Ripping Off American Taxpayers.

* * * * *
America needs to know that ACORN is restructuring in time to help re-elect President Obama in 2012. Obama used to work for ACORN and represented the group in court as its lawyer. These radical leftists who use the brutal, in-your-face, Machiavellian pressure tactics of Saul Alinsky want to destroy America as we know it and will use any means to do it.
Buy the book at Amazon. Visit the Subversion Inc. Facebook page. Follow me on Twitter.