I’m on today’s installment of PJTV’s “The Bottom Line” with the ever erudite host James Poulos. 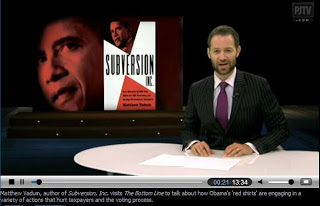 America needs to know that ACORN is restructuring in time to help re-elect President Obama in 2012. Obama used to work for ACORN and represented the group in court as its lawyer. These radical leftists who use the brutal, in-your-face, pressure tactics of

Saul Alinsky want to destroy America as we know it and will use any means to do it.
Buy my book Subversion Inc. at Amazon and in Barnes & Noble and Books-A-Million bookstores. Visit the Subversion Inc. Facebook page. Follow me on Twitter.