My pre-election musings on what a Romney presidency might look like are quite useless now but maybe they’re worth a chuckle or two. Laughs help to ease the pain a little.

Along the same lines, somebody grabbed screen shots of the provisional Romney transition website that was set up before it disappeared into the ether. 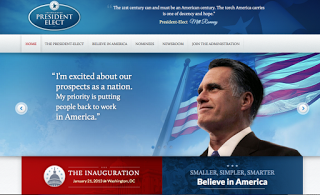 Anyway, here is my November 6, 2012, article from Front Page Magazine: