My article from the Jan. 2, 2014 issue of FrontPage Magazine: 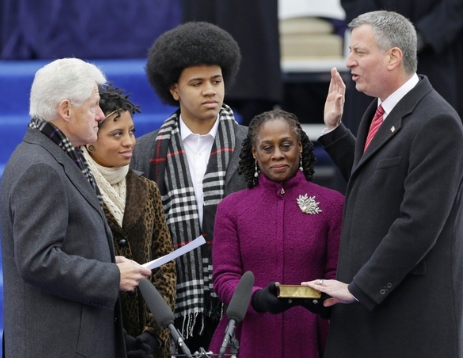 Comrade De Blasio Takes Over
By Matthew Vadum
Communist-sympathizing radical Bill de Blasio has laid out an ambitious, far-left agenda as he begins what is destined to be a disastrous reign as New York’s 109th mayor.
Leveling left-wingers, with their perverse obsession with income equality, are looking eagerly to the city in the hope that the new mayor will “morph New York City’s municipal machinery into a closely watched laboratory for populist theories of government that have never before been enacted on such a large scale,” according to a fawning New York Times profile.
In a pie-in-the-sky inaugural address, de Blasio promised class-based hatred and civil unrest in pursuit of so-called social justice.
“We recognize a city government’s first duties: to keep our neighborhoods safe; to keep our streets clean; to ensure that those who live here – and those who visit – can get where they need to go in all five boroughs. But we know that our mission reaches deeper. We are called to put an end to economic and social inequalities that threaten to unravel the city we love. And so today, we commit to a new progressive direction in New York. And that same progressive impulse has written our city’s history. It’s in our DNA.”
De Blasio’s ascendancy could also help Democrats at the national level two years from now.
The fact that in 2016 America’s largest metropolis and the critical battleground state of Virginia will be under the control of longtime Clinton loyalists is bound to be helpful to the presidential campaign of Hillary Clinton. De Blasio was campaign manager for Mrs. Clinton’s successful U.S. Senate bid in New York State in 2000. Former Democratic National Committee chief and fundraiser extraordinaire Terry McAuliffe, a longtime Clinton crony, is scheduled to be sworn in as Virginia’s 72nd governor on Jan. 11.
De Blasio was formally sworn in on New Year’s Day by former President Bill Clinton. Before administering the oath, Clinton said, “I strongly endorse Bill de Blasio’s core campaign commitment that we have to have a city of shared opportunities, shared prosperity, shared responsibilities.” Also in attendance at the ceremony were Hillary Clinton, New York Gov. Andrew Cuomo (D), and useful idiot celebrities including neo-communist Harry Belafonte and actress Cynthia Nixon.
Unfurling the blood-red banner of class warfare and ugly polarization, de Blasio, an unrepentant supporter of ACORN and Occupy Wall Street, is already plotting early assaults on the Big Apple’s persecuted taxpayers and small business owners.
Sounding like President Obama, who enjoys putting a happy gloss on theft-by-redistribution, at his inauguration the new mayor said, “We do not ask more of the wealthy to punish success. We do it to create more success stories.”
This is, of course, the essence of the gangster abstraction known as social justice. Don’t teach a man to fish; teach him to burglarize homes and steal his neighbors’ fish.
De Blasio is demanding that taxes be increased in the already obscenely overtaxed city in order to pay for universal pre-kindergarten. Pre-K programs are largely recognized by experts as expensive, useless babysitting for preschoolers. This so-called early childhood education plan would warehouse four-year-olds, benefit labor unions and swell the ranks of government bureaucrats.
“We will ask the very wealthy to pay a little more in taxes so that we can offer full-day universal pre-K and after-school programs for every middle school student,” de Blasio said in his speech yesterday.
Billionaire troublemaker George Soros, an outspoken supporter of China’s murderous Communist regime, donated to de Blasio and endorsed his candidacy. Taxing high earners “is sound public policy and will have a powerful impact on reducing inequality,” said Soros, who lives and votes in Katonah, a suburb in Westchester County.
De Blasio wants to put small business people out of work by banning horse-drawn carriages, a familiar site in tourist-friendly Central Park. “We are going to get rid of horse and carriages, period,” he said previously, saying the animals are not well treated.
The local Horse and Carriage Association points out that tourist carriages aren’t the only users of equine labor. The mayor “better end then the mounted police, the park rangers and everything like that. Because they are walking on the same pavement.”
De Blasio vowed yesterday to expand the city’s Paid Sick Leave law “because no one should be forced to lose a day’s pay, or even a week’s pay, simply because illness strikes.” He pledged to force large developers to construct more affordable housing, to fight hospital closures, and to expand community health centers “so that New Yorkers see our city not as the exclusive domain of the One Percent, but a place where everyday people can afford to live, work, and raise a family.”
He promised to curtail the police department’s extremely successful stop-and-frisk policy in order to assuage the hurt feelings “of young men of color.”
Elsewhere in his inauguration speech, de Blasio couldn’t resist taking shots at conservatives, steering clear of the rhetorical high road.
He praised Bill Clinton, saying that “over 20 years ago, when a conservative philosophy seemed dominant, you broke through – and told us to still believe in a place called Hope.”
In a moment that could have come out of the pages of Ayn Rand’s Atlas Shrugged, he mocked Americans who believe in the dynamism of the free marketplace:

Of course, I know that our progressive vision isn’t universally shared. Some on the far right continue to preach the virtue of trickle-down economics. They believe that the way to move forward is to give more to the most fortunate, and that somehow the benefits will work their way down to everyone else. They sell their approach as the path of “rugged individualism.”

He drooled over Hillary Clinton for her communitarian monstrosity, It Takes A Village. “Your groundbreaking commitment to nurturing our children and families manifested itself in a phrase that is now a part of our American culture – and something we believe in deeply in this city. It Takes A Village.”
Incredibly, he thanked Mayor David Dinkins, a laughable failure who did everything in his power to hasten the city’s decline, “for starting us on the road to a safer city, and for always uplifting our youth.”
Extreme-left, Saul Alinsky-inspired community organizers already have significant pull in de Blasio’s fledgling administration.
Former ACORN national chief organizer Bertha Lewis gloated back in September when de Blasio won the Democratic mayoral primary. “We’re baacccck. The right wing will have to deal with it,” said Lewis, a co-founder of the Working Families Party, and an early supporter and adviser to the new mayor.
According to the New York Post, Lewis played a “critical behind-the-scenes” role in the primary campaign of de Blasio. New York ACORN’s successor group, New York Communities for Change (NYCC), endorsed de Blasio early last year. NYCC field director Harold Miller, a Lewis protege, helped run the mayor’s field operation. Lewis stood behind de Blasio during his primary night victory address. De Blasio recognized the role that NYCC played in his campaign, tweeting, “Thanks to nychange members for coming out tonight!”
Radicals are optimistic that the elevation of an unapologetic Marxist to America’s most prominent municipal office will aid causes such as low-wage worker benefit mandates and universal prekindergarten child-warehousing. Because such programs have been enacted in smaller cities, those on the Left reckon they could metastasize to cities across America should they prove workable in New York.
“The mayor has a remarkable opportunity to make real many progressive policies and prove their merit,” said ever-trendy leftist kook Gavin Newsom, the lieutenant governor of California. When he was mayor of San Francisco, Newsom introduced a form of universal health care and defied then-state law by allowing same-sex couples to marry.
“De Blasio matters,” said Newsom. “A lot of us are counting on his success.”
The New York Times gushes that

Not surprisingly, Marxist academic and Hugo Chavez fan Cornel West, who recently returned to New York to serve as an utterly undistinguished professor at Union Theological Seminary, said de Blasio represented “a sigh of relief from the reign of Bloomberg,” the soda-banning, do-gooder control freak who’s not left-wing enough for West. After initially backing Obama, West now considers the president to be a moderate and a sellout. “We don’t want de Blasio going down that Obama lane, or we’ll be in trouble,” he said.
Bill de Blasio was born Warren Wilhelm Jr. on May 8, 1961 in New York City. Soon after graduating with a bachelor’s degree from New York University in 1983, he legally changed his name to Warren de Blasio-Wilhelm, adding his mother’s maiden name. In 2002 he changed his name again, this time to Bill de Blasio.
Although journalists routinely call de Blasio a liberal, he is anything but; the new mayor’s Communist pedigree stretches far back. Historian Ron Radosh describes de Blasio as ”a far left radical whose ancestors are the New Left and the Communists,” and “a bona fide red diaper baby” who, “like many of his generation … kept his parents’ … pro-Communist politics not far from his heart.”
A longtime supporter of America’s Communist enemies, during the Cold War de Blasio toured the Soviet Union and served as an organizer with the anti-nuclear, anti-American group Physicians for Social Responsibility. He was also a backer of Nicaragua’s Soviet-backed Sandinista dictatorship and as recently as this past September he affirmed he was “proud” to have supported that junta.
In 1990 de Blasio described himself as an advocate of “democratic socialism,” an ideological euphemism favored by Marxists. In the mid-nineties, he was executive director of the New York branch of the New Party, a Marxist, ACORN-affiliated political coalition to which Barack Obama likewise belonged.
In 1994 de Blasio married former lesbian activist Chirlane McCray. They honeymooned in Fidel Castro’s Cuba, in violation of the U.S. ban on travel to that country. In 1996 de Blasio ran the New York state operation for the Clinton-Gore re-election campaign.
From 1997 to 1999 de Blasio served as the New York/New Jersey regional director of the Clinton administration’s Department of Housing and Urban Development (HUD), where he served under the egomaniacal HUD Secretary Andrew Cuomo. De Blasio left HUD in 1999 to become campaign manager for Hillary Clinton’s Senate campaign.
While serving on City Council, in 2002 de Blasio participated in a City Hall ceremony honoring the vicious, land-grabbing Robert Mugabe, the openly anti-white, Marxist dictator of Zimbabwe.
Now that he’s ensconced in office, de Blasio shows no signs of moderating.
This brings to mind what the great H. L. Mencken once said: “Democracy is the theory that the common people know what they want, and deserve to get it good and hard.”
When they put de Blasio in Gracie Mansion, New Yorkers opted for socialist chaos and decline — and that’s exactly what they’re going to get.