My article in today’s FrontPage magazine: 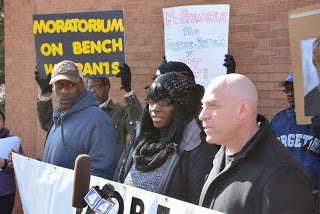 Ferguson Rent-A-Mobs Exposed
By Matthew Vadum
ACORN’s successor group in Missouri has been paying protesters $5,000 a month to generate civil unrest in Ferguson, the troubled St. Louis suburb where black youth Michael Brown was killed by a white police officer last August.
We know this because some of the protesters haven’t been paid and, now, they are demanding what they were promised. They held a sit-in at the offices of Missourians Organizing for Reform and Empowerment (MORE) and posted a demand letter online.
MORE is the rebranded Missouri branch of the former Association of Community Organizations for Reform Now (ACORN) which filed for bankruptcy in late 2010. That ACORN state chapter reconstituted itself in December 2009 as MORE under orders from ACORN’s national headquarters. President Obama used to work for ACORN and he represented it in court as a lawyer. (See my previous article on MORE.)
MORE has been active in the Ferguson protests and in efforts to free jailed demonstrators so they can continue vandalizing businesses, intimidating perceived adversaries, setting fires, throwing projectiles and human waste at cops, and engaging in the Left’s usual modes of so-called nonviolent protest. MORE believes that protesters should be given a blank check to inflict whatever harm they wish on the community in pursuit of social justice.
The unpaid rent-a-mob operatives complain that MORE stiffed them the same way ACORN did to hired protesters throughout its 40 years of radical left-wing rabble-rousing. The ACORN network’s leadership was always predominantly white while its foot soldiers were mostly non-white, a fact that caused tension within the criminal community organizing outfit.
Blogger Kristinn Taylor reported at St. Louis-based blogger Jim Hoft’s website, Gateway Pundit, that “[b]lack activists held a sit-in at the office of MORE … on Thursday to press their claim that groups led by whites have collected tens of thousands of dollars in donations off of the Black Lives Matter movement without paying the Black participants their fair share.”
One of the angry protesters can be observed threatening MORE executive director Jeff Ordower, a bald white man, in a video posted to the Twitter account of @search4swag on May 14 with the hashtag #CutTheCheck.
“We gonna just fuck you up,” she said to Ordower from across a boardroom-style table.
Ordower, an outspoken vote fraud apologist, previously ran Missouri ACORN and oversaw ACORN’s Midwest operations. He was also an SEIU organizer in Texas.
In his online biography, Ordower boasts that he was “one of a group of founders of the Chicago based organization Gender Just, which merged queer, class and racial justice.”  The bio states that he “is welcoming co-conspirators in attempts to scale up numbers of radical organizers who can financially support themselves in the work.”
In other words, Ordower admits that paying organizers isn’t exactly a priority for him.
But a group called Millennial Activists United posted a demand for payment online. MAU describes itself in its Twitter profile as an “[a]ctivist collective for youth organization. Created by young, queer, Black women. Education, grassroots power & leadership.”
Immediately below is the statement MAU posted:

On May 14, 2015 many individuals and organizations of the protest movement that began in Ferguson, Missouri organized a sit-in in the office of Missourians Organizing for Reform and Empowerment (MORE). The demand was simple: Cut the checks.
Early in the movement, non-profit organization MORE, formerly known as the St. Louis chapter of ACORN, and local St. Louis organization Organization for Black Struggle created a joint account in which national donors from all over the world have donated over $150,000 to sustain the movement. Since then, the poor black [sic] of this movement who served as cash generators to bring money into St. Louis have seen little to none of that money. Furthermore, since the influx of funding has started, poor black people continue to take to the streets all the while losing their homes, vehicles, ability to feed themselves and their families, and suffering from trauma and mental illness with no ability to afford quality mental health services. Questions have been raised as to how the movement is to sustain when white non-profits are hoarding monies collected of off [sic] black bodies? When we will [sic] hold the industry of black suffering accountable? The people of the community are fed up and the accountability begins here and now.
This isn’t about MORE. This is about black lives in the Black Lives Matter movement who are literally broke and starving. There is an insidious strand of racism and white supremacy that exists in this movement and it is called the Non-Profit Industrial Complex. As a by-product, it provides decent salaries and comfort to many people who are not affected by the disparities that they are trying to address. This money is typically in the hands of white people who oversee the types of services that the non-profit provides, while having select token black people to spearhead the conversations within and to the community.
We NEED to be thinking about justice for black people. This means white people must renounce their loyalty to the social normalcy that maintains white power and control. If black lives really matter, justice and self-determination for black people would mean the black community would control it’s [sic] own political and economic resources.
It is asinine to believe that black people can continue to organize and take to the street when they can barely meet their basic needs. In St. Louis, organizers and protesters depleted $50,000 of the available funds and dispersed it among the people in the movement in no particular order. Jeff Ordower, executive director of MORE, stated that another $57,000 is expected in the next one to two weeks in which those funds will also be dispersed to the black people in the movement.
Moving forward, we are building a board of accountability within this movement.  We must funnel economic into this movement through the hands of black people who are fighting with and for black life. More on this board will be discussed as we develop.

So MORE doesn’t seem to be strapped for cash.
MORE and other groups supporting the Black Lives Matter movement have received millions of dollars from radical America-hating financier George Soros (net worth: $24 billion). In the fall MORE even created an Amazon wedding registry so supporters could donate rioting supplies. And yesterday it was reported that hip hop performer Jay-Z and his wife Beyoncé (combined net worth: over $1 billion) wired tens of thousands of dollars to help bail out protesters jailed in the Black Lives Matter riots in Ferguson and Baltimore. Perhaps that money went to MORE.
In any event, MORE apparently has money somewhere but Ordower isn’t anxious to part with it.
Stiffing employees isn’t exactly a recent innovation in the so-called social justice movement. This exploitation of workers by those who loudly posture as crusaders against the exploitation of workers was typical of the since-dissolved National Welfare Rights Organization (NWRO), ACORN’s parent nonprofit.
As I reported in my book, Subversion Inc.: How Obama’s ACORN Red Shirts are Still Ripping Off and Terrorizing American Taxpayers, NWRO did the same thing to its hapless employees.

“[NWRO chief] George Wiley would pay the telephone bill rather than the staff—even though the employees complained that they couldn’t pay their rent,” according to Wiley’s  biographers. Wiley expected employees to “live off the land,” like an invading army. They were encouraged to pool resources, get free meals and accommodation, or get onto another organization’s payroll while still working at NWRO.

ACORN had a lousy employee relations track record too. It habitually failed to pay wages to its workers, directed workers to commit voter registration fraud, busted attempts to unionize the group, asked to be exempted from paying the minimum wage, and sent women to canvass alone at night in bad neighborhoods.
Meanwhile, the thugs of MORE have been doing the same gangster-like things for which ACORN was known.
MORE members went door to door last December distributing flyers in the neighborhood of St. Louis County Circuit Judge Maura B. McShane. Another way of looking at this is to say that they –like a Latin American drug gang– were trying to let the judge know that they know where she lives.
Understandably, “[s]everal Warson Woods police officers parked their patrol cars near McShane’s home while the group walked through the neighborhood,” the St. Louis Post-Dispatch reported.
The MORE members’ goal was to pressure the judge into appointing a special prosecutor to initiate a fresh case against former Ferguson police officer Darren Wilson, MORE spokeswoman Julia Ho admitted to the newspaper. In the fall a local grand jury failed to indict Wilson in the death of Michael Brown, the young “unarmed” black man who attacked him and tried to grab his handgun. In other words, the government’s case against Wilson couldn’t even meet the probable cause standard, which isn’t exactly a high evidentiary burden.
McShane is the presiding judge in her circuit and as such has administrative authority over municipal courts.
Ho said MORE members spoke to her in her courtroom in October about what the newspaper called “predatory municipal court practices in St. Louis County.” She didn’t get back to them, Ho said, so MORE took action in December.
They left letters demanding a new grand jury at the judge’s front door. They also spoke with some of her neighbors. “We want them to pressure (Judge McShane) to do something,” Ho said.
As Jim Hoft noted, the St. Louis Post-Dispatch characterized the MORE members as engaging in activism. He added caustically that

In the New St. Louis
** Leaving letters full of demands at the door of a Judge’s home is not a threat.
** Knocking on the door of all of her neighbors is not a shakedown.
** Demanding a special prosecutor after Wilson has been cleared of wrongdoing is not double jeopardy.

In putting often-violent protesters on the payroll, MORE was carrying on an old ACORN tradition.
Predatory subprime lenders Herb Sandler and his late wife Marion gave nearly $11  million to ACORN affiliates from 1999 through 2008 through their family foundation. In exchange ACORN led a propaganda campaign including street protests against the Sandlers’ main competition for subprime mortgages at the time, Wells Fargo.
The left-wing Sandlers, who postured as defenders of the poor, made it onto Time magazine’s “25 People to Blame for the Financial Crisis” list. They sold their S&L, World Savings Bank, and its vast portfolio of junk mortgages of Wachovia, which then collapsed and was snapped up for cheap.
The remnants of the ACORN empire, particularly New York’s Working Families Party, supplied muscle for Occupy Wall Street and helped to organize the original OWS protests in Lower Manhattan in September 2011.
In 2009 ACORN provided instant protesters in Manhattan in exchange for a payment of about $500,000 by the United Federation of Teachers, the New York City affiliate of the American Federation of Teachers. The goal was to block the expansion of Harlem Success Academy, a charter school that is part of Success Charter Network. White labor leaders didn’t want to be the face of opposition to black charter schools with largely black student bodies so they brought in ACORN’s non-white on-the-meter picketers.
Some dubbed ACORN’s protest-for-hire services the “Muscle for Money” program.
Under the leadership of MORE’s Jeff Ordower, ACORN’s rent-a-mob services live on in Ferguson, Mo., and probably in other places.
And President Obama just threw a lifeline to groups like MORE.
Yesterday in Camden, N.J., as Obama alternately praised and bashed police, the Justice
Department announced it would reward rioters by funneling $163 million to community organizations like MORE. Camden was an appropriate location for the president’s bloviating because left-wing policies helped to turn it into the poorest and most dangerous city in America. This community organizers’ paradise on the Delaware River was part of President Lyndon Johnson’s disastrous “Model Cities” program.
The new grants are supposed to be used to improve relations between police and the communities they serve.
But that’s not what Ordower and friends will do with the money.