I learned today that Larry Grathwohl was found dead in his Cincinnati apartment. 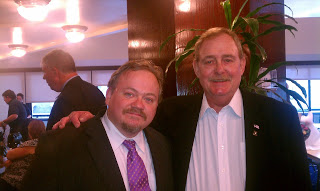 No cause of death has been announced but my guess is it was natural causes. In the above 2011 photo Larry is shown at the right.

The Vietnam vet put his life on the line by infiltrating the Weather Underground Organization. He was in the inner circle of Bill Ayers and Bernardine Dohrn. He told his fascinating tale in the recently reissued book, Bringing Down America.

Here is a link to  a tribute by Tina Trent. I wrote an article about Larry in 2010.

Here’s what I wrote about Larry at pp. 35-6 of my 2011 book, Subversion Inc.: How Obama’s ACORN Red Shirts are Still Terrorizing and Ripping Off American Taxpayers:

Although in retrospect Ayers has criticized some of his past statements as foolish, his core beliefs haven’t changed. His hatred of America burns just as bright today as when his terrorist cell plotted to use dynamite to murder military officers at a dance in Fort Dix, New Jersey in 1970. “This society is not a just and fair and decent place,” he said in 2001. “The pundits all pat themselves on the back: ‘God, what a great country.’ . . . It makes me want to puke.” In what must have been the worst case of bad timing in history, Ayers denounced the U.S. in a profile that ran in the New York Times on Sept. 11, 2001. “I don’t regret setting bombs,” he said. “I feel we didn’t do enough.”

What exactly did Ayers mean? According to Bringing Down America author Larry Grathwohl, the Weather Underground made plans to kill the one-tenth of the U.S. population they expected would turn out to be “diehard capitalists” incapable of reeducation. Grathwohl is a Vietnam War veteran who, after fighting Communists abroad, decided to fight them at home. After returning to America having served in the U.S. Army’s 101st Airborne Division, Grathwohl took it upon himself to infiltrate the group. Incredibly, very little has been written about what the Weather Underground planned to do to America if it seized power. (endnote 57) Even today Ayers refuses to disavow violent tactics. “I never denounced what we did and the reason is, because in the context of those times and what was going on I actually think that we were very restrained and I’ve always thought that and I still think it. I think the most violent force then and even more violent today is the U.S. government.

57. “Larry Grathwohl on Ayers’ Plan for American Re-education Camps and the Need to Kill Millions,” posted October 29, 2008, at (click here), accessed July 25, 2010. Grathwohl made the assertion in No Place to Hide: The Strategy and Tactics of Terrorism (Part V), a 1982 documentary film directed by Dick Quincer. Grathwohl is author of Bringing Down America, an out-of-print book published by Arlington House in 1976. He infiltrated the Weather Underground and participated in internal discussions in which its leaders laid out plans to systematically liquidate those who resisted the communist revolution they aspired to create.